Next: Degenerate Art: An architecture of respect and retreat Up: Hacked Inhabitants Docs


Whittle Headquarters: An Architecture of Decency and Deceit 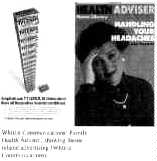 The New Corporate Style -- as distinguished from the curtain-walled office towers of the 1950s and 1960s -- is exemplified by the corporate headquarters of Whittle Communications in Knoxville, Tennessee. This company, now defunct, was partially owned by Time Warner Inc., and promoted itself as being on the cutting edge of educational reform. The celebration of pastiche in its headquarters, however, reveals a conservatism, indeed, revisionism in its agenda.

Whittle had been active in three interrelated areas: the publication of magazines directed at a specific clientele, the development of educational/commercial television (including Channel One and the Whittle Educational Network), and the development of a for-profit school system (The Edison Project). Whittle publications developed a theme, were distributed free of charge, and contained intensive advertising for products related to the theme. The Family Health Adviser pamphlets, for example, were available, without cost, in the waiting rooms of physicians' offices in a special display rack provided by Whittle. The pamphlet itself contained about 40% advertisements related to the subject. Channel One was conceptually similar. Television sets and satellite receiving equipment were provided free of charge to the 9,000 schools (representing about 6 million students) that enrolled in the plan. Schools were required, by contract, to tune in daily to the 12-minute Whittle-produced news broadcast, which contained 2 minutes of advertising. Channel One has been vigorously opposed by many school systems as an invasion of a traditionally public, non-commercial domain by private interests with their own commercial and political agenda. This concern, among others, was raised in Kalamazoo, Michigan recently when four teachers were reprimanded by their administrators for refusing to air the news program during their classes. The Edison Project is a further attempt to market mass education as a commodity by transferring the design of education to the private sector. Whittle conceived and constructed model schools would be supplied as part of a total education package to local school boards. This concept shared similarities with the Education 2000 initiative of Secretary of Education Lamar Alexander who was, not surprisingly, an early investor in Whittle Communications. Both Channel One and Edison have the potential to reduce the prerogative of the teacher in disseminating information. 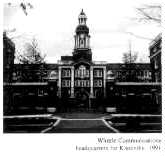 For Whittle corporate headquarters, designer Peter Marino of New York created a 4-story complex described as an urban campus, occupying two city blocks in downtown Knoxville. The site, formerly occupied by a Trailways bus station and small retail/commercial venues, was bisected by Market Street, a major pedestrian connection between the TVA complex at its northern end and the City-County Building at the south. The city agreed to close a length of Market Street, now incorporated within the gated Whittle complex, as the north-south axis of a large, private open space. The new building did not replace retail or commercial uses at the street level, and pedestrian activity is limited to those who use its several entrances. It is an example of the process of gentrification of downtowns, or what is left of them, that excludes 'dirty' uses.

The neo-Georgian architecture, suggesting familiarity and gentility, can best be described as 'decent,' one of several code-words used by the Nazis to describe what 'degenerate' art was not. Philip Morris, editor of Southern Living magazine, has called it "a darn good way to make a building." Its brick facades pierced by small, double-hung windows suggest traditional bearing-wall construction, but the building, responsive to a 1990 budget, has a steel frame with metal stud exterior walls clad in brick veneer. The use of repetitive window openings might indicate partitioned interior spaces such as small offices, but the space planning is efficiently modern, with expansive open-plan work areas punctuated by enclosed rooms that contain the more private functions. The insistent symmetry of the plan contradicts the functionally-diverse physical program and a site that contains many possibilities for asymmetrical development. Bruno Zevi assigns political and psychological meaning to the use of symmetry:

"Symmetry is the facade of sham power trying to appear invulnerable. [It is] fear of flexibility, indetermination, relativity and growth -- in short, fear of living."

"Symmetry is one of the invariables of classicism. Therefore asymmetry is an invariable of the modern language. Once you get rid of the fetish of symmetry, you will have taken a giant step on the road to a democratic architecture."

But democracy, or power through representation, is not what Whittle was about. By hiding its true nature behind an historicist facade, the building accurately reflects the philosophy of a company whose product is advertising hidden behind a veneer of 'information.' (Whittle correctly and unapologetically asserts that exposure to advertising is the price we usually pay to receive information.) The project has, indeed, been considered by the architectural press in terms of its image, rather than as a 'serious' piece of design. Its visual language communicates a deliberate critique of modern architecture -- indeed, of 'elitist' taste -- in a way that the populist language of the company's publications delivers a subtle critique of intellectualism. Not wishing to give it too much prominence or risk criticism for praising it, Progressive Architecture chose a student intern writer to summarize the building's (and the company's) message:

"In an age of star designers, it is refreshing to see work that clearly reflects the will of a client, rather than the ego of the architect. Equally refreshing is an office building which refuses to succumb to the 'corporate aesthetic.' "

The author fails to suggest that the Whittle headquarters represents a new corporate aesthetic, one that is perhaps more efficient and audacious than the old. The building, through its aesthetic, not only projects the image of a company that confuses concern for society and concern for profit, but subtly attacks those 'elitists' who might challenge its authority.